Read the article | What is the LiDAR of Weilai ET7?

On June 22, Weilai organized an analysis and communication meeting about ET7 lidar online. Dr. Bai Jian, vice president of Weilai Intelligent Hardware, explained to us why Weilai equipped ET7 with lidar and its characteristics. .

First of all, NIO believes that a car should be a safe and free mobile living space, so it needs to have a full range of security.In terms of intelligent driving assistance, Weilai believes that in addition to advanced software algorithms, vision + radar is the best combination of perception hardware. 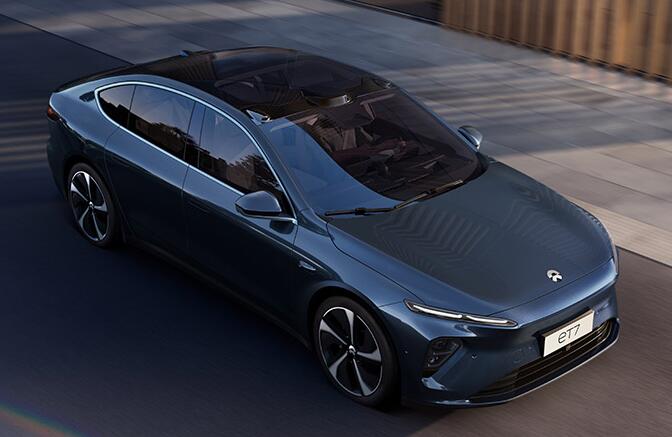 Therefore, the ET7 developed based on the NT2 platform is equipped with the NIO super-sensing system AQUILA, which has 7 8-megapixel high-definition cameras, 4 3-megapixel high-sensitivity surround-view cameras, 5 millimeter-wave radars, 12 ultrasonic sensors, and a A 1550nm ultra-long-range high-precision lidar.

Friends who often watch nature documentaries should know that bats and dolphins in the animal kingdom belong to fast-flying and fast-swimming species. Although one is in the sky and the other is in the sea, they both perceive the surrounding environment through sound waves, and can Change directions quickly, and walk freely and safely between the heavens and the earth while maintaining the speed.

Therefore, scientists have long known that detecting the environment through "waves" is sometimes more reliable than vision, especially in many special environments.For example, bats are nocturnal animals, still flying at high speed in a dark environment, coming and going freely.

Of course, for the "vision" of the vehicle, special situations can be roughly divided into two types. The first is some weather conditions, such as strong light, rain and fog, and sand and dust, and the other is the "confusing" objects, which will affect the vehicle. The recognition ability of the camera makes a difference, and lidar can play an important role in this situation.

Dr. Bai gave us two examples. The first one is that when the vehicle exits the tunnel in broad daylight, there will be a change of strong light.Friends who have walked through the high-speed tunnel have all experienced that even the human eye will be "shaken" at this time, and the situation at the entrance of the tunnel cannot be seen clearly, so it is necessary to slow down, and the recognition ability of the camera will be weakened at this time, or There needs to be an adaptation process.

And lidar won't get the impression of strong light, because it only "records" the actual object, and the light is transparent to it, whether it is white light, green light, red light, or colorful light.

The "confusing" object takes a plastic bag as an example. In the demo scene, a brown object suddenly appears in front of the vehicle. If it looks like a rock or a hard object from the camera's point of view, it may notify the driver. The assistance system makes emergency braking or evasion, but the lidar can "see" that it is just a plastic bag that can help the driver or driving assistance system to handle the road situation ahead more "calmly".

In addition, in the case of rain, fog, sand and dust, if there is water, fog or other dirt on the camera, it will interfere with the line of sight and always tell you "be careful, there is something ahead".This is what we usually encounter when reversing in rainy or dusty weather. Even if there is only a drop of water on the camera, the parking system will keep ringing.

And lidar, because it recycles its own beam to "draw" objects, so as long as the beam's emission and reception do not interfere too much, efficient identification can be performed.If there are too many "dirty things" in front of the NIO ET7's lidar, it will remind the driver on the dashboard in the car, and the user can wipe the radar with an exclusive cleaning kit.

In fact, through the above cases, we have roughly understood the working principle of lidar, that is, by emitting a laser beam, then receiving a reflected beam, and quickly "drawing" the size, contour shape of the object through the driver assistance system, so that the vehicle knows what is in front of it. what is.

Of course, in addition to dealing with extreme weather and objects, lidar can make the surrounding environment more three-dimensional and achieve a leap between 2D and 3D, thus closer to human visual perception.

The knowledge points of conventional lidar are finished, so is there any other advantage of NIO ET7 lidar?Of course there is, see below

According to Dr. Bai Jian, the watchtower-type lidar equipped with NIO ET7 has three characteristics, namely "seeing far away", "seeing clearly" and "seeing steadily".Because its farthest detection distance reaches 500m, the horizontal viewing angle can reach a field of view of 120°, it can emit 1550nm laser, and the highest resolution reaches 0.06°x0.06°.

When explaining "seeing far", Bai Jian introduced us a proprietary technical parameter in the field of lidar: reflectivity, which shows the reflection efficiency of the light beam after it hits the object in front. For example, there are 100 rays hitting the front object. On the object, there are 10 reflections back, which is 10% reflectivity. The higher the value, the higher the accuracy of drawing the object.

This parameter is usually used to test the detection distance of lidar. Under the same 10% reflectivity, the lidar of NIO ET7 can detect objects up to 250m away, while the industry is generally 200m or 150m s level.

With a broad field of vision, it is necessary to have good "eyes". The LiDAR of NIO ET7 has a "fixed gaze" function, and the resolution of its horizontal angle (H) and vertical angle (V) are both 0.06°. The common resolution in the industry is the level of 0.1°*0.2°, and their specific differences are as follows.

The red dot in the picture is the beam array after the lidar irradiates a 1.8m pedestrian 200m before. We can clearly see that the Weilai ET7 lidar forms an array of 54 red dots, while the left one has only a pitiful 12 red dots The formed array, if we keep the places covered by the red dots, and wipe off the places that are not covered, this effect will appear.Can you see what's on the left?

Another advantage of high resolution is that it can make the image more three-dimensional. This TV or screen is very similar. The denser the light source array, the more precise details can be presented, and the image is more lifelike.

However, don't misunderstand the word "fixed", it is not a rigid "fixed", but a "firm" with concentrated eyesight, because the high resolution of the NIO ET7 lidar has a very wide range of applications and a horizontal field of view. It is 40° left and right, and the vertical field of view is between 9.6° up and down.

When introducing the "steady sight" part, Dr. Bai Jian once again mentioned a professional term: probability of detection (POD), which can express the efficiency of lidar receiving reflections. The greater the probability, the more accurate the object can be identified.If the "dummy" above is also used as an example, even if the lidar has a very high beam resolution, it cannot draw an accurate image without a very high detection probability.In this regard, the LiDAR carried by NIO ET7 has reached a high level.

In addition, Weilai's lidar also has a hidden "black technology". If there is also a lidar on the oncoming car, the "shooting" between them will not cause interference.Because each pulse of NIO LiDAR will have an exclusive "ID", the system can identify and even distinguish the different wiring harnesses it emits, so that it will not interfere with itself.

■How is such a lidar "refined"?

According to Bai Jian, the lidar on the ET7 was jointly developed by Weilai and Tudatong after two years, and it was deeply customized according to the characteristics of the model, but this was unimaginable in the past.

The previous conventional "routine" was: a professional sensor development company would spend a long time developing a device, and then the car company would only purchase it and try to match it with the models it developed, often in styling design for advanced functions. Compromise, but the device may not be able to play to its full capacity.

The advantage of joint research and development is to reduce the time for sensors and the vehicle to "run in", so that they can be more perfectly integrated and cooperate with each other, hello and me.

For Weilai, their process is: the wind tunnel laboratory gives the wind resistance coefficient requirements that Weilai ET7 can achieve, and the model design team sets the appearance of the whole vehicle accordingly, and the intelligent hardware department and Tudatong will also according to This requirement is to customize a lidar device to make it contribute to the ultra-low wind resistance of the whole vehicle of 0.208.

At the same time, NIO ET7's lidar has also undergone a number of rigorous tests before mass production and installation, such as a shock test that needs to withstand 50 G pressure, which can simulate various road environments throughout the vehicle's life cycle ; 100+ cycle hot and cold tests under extreme heat at 85°C and extreme cold at -40°C; endurance tests for 2000 to 3000 hours of continuous operation under high temperature and strong light conditions; of course, there are more tests under natural conditions, only After passing many tests, this lidar is truly "refined".

According to official statistics, as of June 19, 2022, the cumulative mileage used by NIO Pilot users has exceeded 441 million kilometers, and the cumulative use of Navigation Assist (NOP) has reached 168 million kilometers. These two technologies have been recognized by many users. It also laid a solid foundation for the research and development and exploration of NIO's intelligent driving technology.

With the delivery of NIO ET7, this car has also become the first model in the market to use lidar to achieve mass production of ACC and LCC, which is considered a "small achievement".Next, NIO's NOP+ function will be delivered in the third quarter of this year, and the ET7, which has all-round perception capabilities, will allow NOP+ to exert its strongest capabilities.

On the other hand, through this analysis, we can also see the capabilities and potential of NIO NT2 platform models in intelligent driving, and we are also full of expectations for the driving assistance of NIO ET5 and ES7, especially ES7 as an SUV , the "watchtower" is higher, and the view may be better.