Top 10 SUV sales in May: 6 independent vehicles on the list, Song PLUS crushed to win the championship

The latest wholesale sales released by the Passenger Federation showed that the domestic passenger car market recovered well in May, with a total of 1.591 million vehicles sold, a slight decrease of 1.3% year-on-year.In the first five months of this year, the cumulative wholesale sales volume of the domestic auto market was 7.981 million, down 3.8% year-on-year.Among them, the SUV segment sold a total of 728,000 new vehicles in May, down 1.9% year-on-year and a month-on-month increase of 63.5%.

Judging from the best-selling list in the SUV market, BYD Song PLUS's championship status has become more solid. With an absolute leading discount of more than 30,000 units (Song PLUS is the only SUV model that sold more than 30,000 units in May), it continues to win the monthly title. Pin crown.Although Haval H6, once the king of the domestic SUV market, also delivered a good month-on-month growth in May, it is farther and farther away from the champion. Song PLUS has opened a monthly sales gap of over 10,000 units.It is also worth mentioning that in addition to Song PLUS, BYD's othernew energySUV, Yuan PLUS, once again made the top ten sales list in May after April. 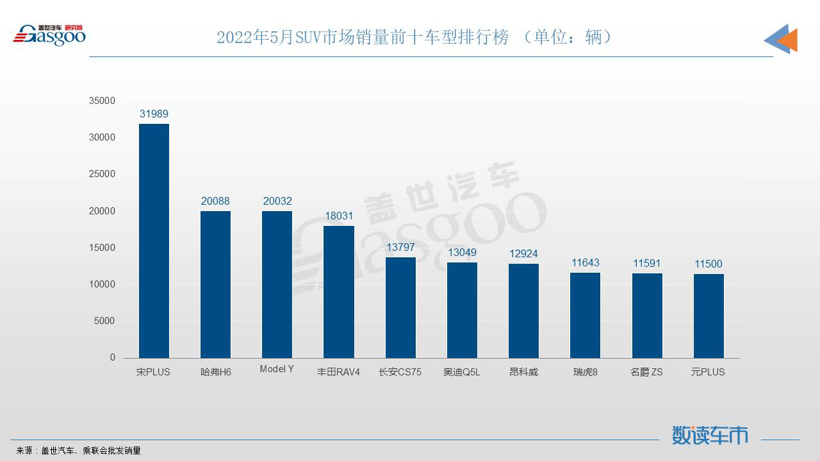 How hot is BYD's current market momentum?Song PLUS's results are the most convincing. Not only has it won the sales champion in the SUV segment for two consecutive months, but it has also opened a growing market gap with other models.This is still a sales result under the background that the terminal vehicle supply is very tight. After BYD's newly opened production lines are put into operation one after another, after Song PLUS eases the current situation of tightproduction capacity, it will bring a larger market if nothing else. surprise.Perhaps, Song PLUS will be able to experience the happy moment when Haval H6 once sold 60,000 to 70,000 units per month.

At a time when the new energy vehicle market continues to boom, the traditional "kings" represented by Haval H6 and others are becoming more and more difficult to touch the once-easy champion position.May is the fourth month in a row that Haval H6 has lost the SUV sales crown. Whether it can keep the runner-up position is also a big question mark. The second-ranked electric SUV Model Y may achieve overtake at any time after its production capacity is restored.However, for Great Wall Motors, its layout in the new energy market has gradually formed a scale. In addition to ORA's main focus on pure electric, many models under the WEY brand and Haval brand already have a lot of plug-in hybrid and oil-mixed products. If Haval H6 can also be quickly "electrically shocked" in the future, the market performance may still have the possibility of achieving new breakthroughs.

Although it failed to enter the top tenSUV saleslist in April, after the production capacity of Tesla's Shanghai factory gradually recovered in May, Model Y quickly handed over monthly sales data of more than 20,000 units, returning to the top three sales in the market segment. .Obviously, although it has experienced several rounds of official price increases in a short period of time, Tesla's popularity in the domestic market has not been greatly affected. The advantage of brand power determines that in the high-end electric SUV market, Model Y There is still no real competitor.

The RAV4 is the world's highest-selling SUV model in 2021, and it is also the only SUV product with annual sales exceeding one million.In the domestic market, the RAV4 also delivered an annual sales volume of nearly 200,000 units last year, which is an important pillar of Toyota's sales in China.The ability to maintain a continuous and stable market output is due to the fact that the Toyota brand has always enjoyed a good reputation in terms of product reliability, and the user reputation of core components has always been good; it is also because the RAV4 was replaced with the TNGA architecture in 2019, both internal and external design. With a good improvement, the overall style has become more tough, and the appeal to young consumers has improved a lot.

Large-sized body, stylish interior and exterior design, and relatively affordable price are the core points for Changan CS75 to maintain its market competitiveness.But similar to the Haval H6, at a time when new energy vehicles have become popular, the Changan CS75 has also cooled a lot in the recent market. Last year, it was the biggest competitor of Haval H6 on the road to the championship, but now it is difficult to see the hope of sprinting the championship. .For the Changan CS75, it may be a more realistic pursuit to continue to appear on the SUV bestseller list.

At the beginning of last year, the Audi Q5L entered the top ten SUV sales list for two consecutive months, but for a long time, the Audi Q5L was isolated from this list again, and the market momentum has been suppressed by the Mercedes-Benz GLC.There are two main reasons why the Audi Q5L has re-emerged in the market recently. On the one hand, compared with Mercedes-Benz and BMW, Audi is more willing to make profits in the terminal market. Although it is an important profit cow of Audi, the Audi Q5L is also more favorable in terms of discounts. Unequivocally, it is very common for discounts to exceed 60,000.On the other hand, the recently introduced purchase tax reduction policy is also a stimulus. The low-end version of the Audi Q5L is included in the purchase tax subsidy, which is a good boost to sales.

Envision once relied on the benefits of dislocation competition (positioned between compact SUVs and mid-size SUVs), and achieved quite good market results, but with the failure of the overall upward strategy of the Buick brand, Envision's relatively high pricing Constraining the subsequent development, especially after the entire Buick brand model was caught in the market quagmire of price wars, Ankewei lost its brand endorsement as a high-end car, and to consolidate its market position, it can only start a price war.The good news is that with the gradual release of terminal discounts and the stimulation of the continuous release of new versions of products, the market performance of the Ankewei family has not experienced too obvious collapse, and the monthly sales of more than 10,000 vehicles can basically be handed over in normal months.

Tiggo 8 underwent an official downgrade when it was renewed in 2020. After improving the price/performance ratio, the market popularity has also improved significantly. In October 2020, it finally broke into the top ten SUV sales list, and occasionally it can be traded since then. The monthly sales exceeded 20,000 units.At present, the Tiggo 8 family already owns many models such as Tiggo 8PRO, Tiggo 8PLUS, Tiggo 8 Kunpeng Edition, etc., expanding the market coverage of the entire family.In addition, it is worth mentioning that the plug-in hybrid version of Tiggo 8 (Tiggo 8PLUS Kunpeng e+) has been launched on the market. Recently, it was also reported that Tiggo 8 will launch a hybrid version of gasoline and electricity. The rich family product matrix may be able to Help Tiggo 8 family market performance to a new level.

SAIC MG's recent market popularity is good.In the sedan market, MG 5 has been among the top ten sales of sedans for many times; in the SUV market, MG ZS has also ushered in a continuous market explosion, ranking among the top three in SUV sales for several consecutive months.The reason is simple. In addition to the lower price, the fashionable interior and exterior design of the MG brand has a good appeal to young consumers; coupled with the sports brand image that MG has built in China, it has gradually gained more young consumers. The recognition of people, the MG brand that has always been regarded as the younger brother of Roewe, has finally been able to see the moonlight, and began to have its own star car models.

Yuan PLUS is a brand-new A-class electric SUV built by BYD based on e-platform 3.0. Although it is still a member of Yuan family, Yuan PLUS and Yuan EV are already two generations of cars, and the product positioning is no longer on the same level. (The Yuan EV is a small electric SUV).Yuan PLUS was officially launched on the market in February, and the sales in March, April, and May were more than 10,000 units.Obviously, for BYD, it is not only the plug-in hybrid models equipped with the DM-i system that are sought after by the market. In the field of pure electricity, BYD also has the right to speak in the market.It is foreseeable that for a long period of time in the future, catching up with BYD in the field of new energy will be the main goal of many domestic car companies.