The iFACTORY production strategy has been implemented

The BMW Group has presented the future-oriented BMW iFACTORY automobile manufacturing concept in China.On June 23, 2022, the large-scale upgrading project of BMW Brilliance's production base (referred to as Lida Plant) was officially opened.The new factory is the best example of BMW's BMW iFACTORY production strategy. It sets a new benchmark for automobile production from the three aspects of "lean, green and digital", demonstrates BMW's leadership and innovation strength in the field of automobile production, and strongly supports the upgrading of China's manufacturing industry. Development of the automobile industry.At the same time, the total investment of 15 billion yuan in this project is the largest single investment in BMW's history in China, which confirms the BMW Group's long-term confidence and commitment to China.

The Rida plant has extremely high production flexibility and has an electrification-oriented production system that can achieve up to 100% of theproduction capacity.BMW's first pure electric mid-size sports sedan - the all-new BMW i3 - has officially entered production here. 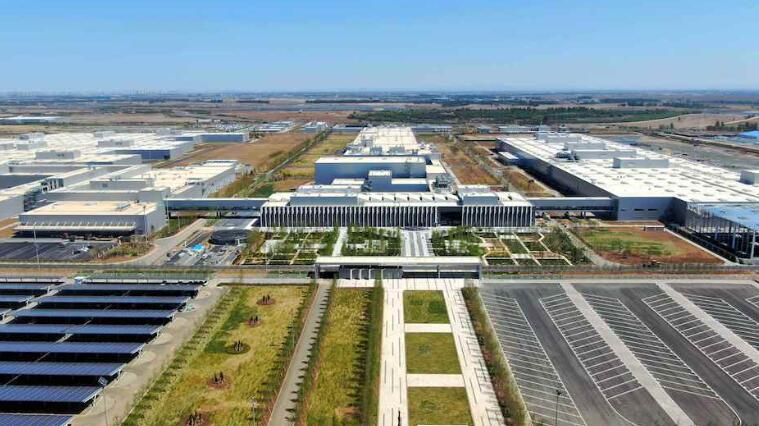 Dr. Nord Kovach, Director of BMW Group Production,said: "The future of vehicle production requires a new, holistic way of thinking. With the BMW iFACTORY strategy, we are defining the future direction of BMW Group factories and production technology to respond to The challenge of transitioning to electric mobility. With leading digitalization, sustainability and a high degree of flexibility, the Rida plant is a prime example of the BMW iFACTORY strategy.”

Mr. Gao Le, President and CEO of BMW Group Greater China,said: "In just three months, the product upgrade project of our Dadong plant was opened, the Lida plant was officially opened, and two domestic models were launched - the all-new The BMW X5 and the new BMW i3. This shows that 'BMW Group, Home in China' is not just a promise, but a tangible and continuous commitment. Our electric mobility strategy is the key to achieving the BMW Group's clear sustainability goals. The new BMW The iFACTORY Lida plant can switch to 100% electric vehicle production at any time according to market demand. The Lida plant, together with the Tiexi and Dadong plants, will play an important role in our acceleration of China’s electrification transformation.”

Dr. Dai Hexuan, President and CEO of BMW Brilliance Automotive Co., Ltd.,said: "Today is a proud day for BMW Brilliance and the BMW Group, and it marks another important milestone in our nearly 20-year successful development in Shenyang. With the new Lida plant With the opening, we have not only fully increased the production capacity of the Shenyang production base, but also prepared to meet the current and future needs of Chinese customers. The Lida plant perfectly embodies the lean, green and digital BMW iFACTORY strategy.”

The "Industrial Metaverse" shines into reality, and the level of digitalization reaches a new height

The Lida factory built by Quanxin fully implements the BMW iFACTORY concept, and the level of digitalization has reached an unprecedented level in the industry.The Rida factory is the first factory in the BMW Group that has been planned and simulated in a virtual environment from the very beginning. From factory planning, architectural design, production line layout to equipment debugging, all digital creations are made on the powerful Epic Games Unreal Engine 3D creation platform. Twin models and simulations to build a true "industrial metaverse" factory.Before the completion of construction, factory employees can take the lead in conducting a full range of factory experience in the virtual space, analyze, evaluate, and verify, and discover problems and areas for improvement in design and system operation in advance, and make adjustments and optimizations in a timely manner. Reduce the number of rework generated in the subsequent construction execution link, thus greatly reducing the cost and significantly improving the efficiency of factory construction.The integration of the virtual world and the real world has also achieved collaborative planning and debugging across regions and time zones, and effectively overcome the adverse effects caused by the epidemic.This alone made it only take more than two years for the Rida plant to start construction and put into production, which is 6 months shorter than the normal construction period.

In addition, the yard management systempioneered by BMW Groupcombines real-time logistics data with 3D models to simulate various logistics scenarios and support safe, efficient and accurate container management.The new system can support up to 70 times of container entry, exit and container supply production line business every day.Through the digital twin that changes in real time and is visually presented, the staff can keep abreast of everything happening in the yard at any time. Combined with heat map analysis, planners can better plan the yard and provide parts for production accurately and efficiently.For example, loading simulations are linked to automated train dispatch systems to optimize outbound logistics.As nearly 80% of BMW's complete vehicles leave the Shenyang factory by train, these digital technologies ensure that vehicles are delivered to customers on time.

The factory is "data-driven" and uses the Industrial Internet of Things (IIoT) to connect every product, every process and every employee, so as to achieve high-quality and efficient digital production.The factory uses the industry-leading IPSI production management system and real-time location tracking technology to provide instant, transparent information during the vehicle assembly process and present it to workers in real time through mobile terminals and smart programs.Each car's data, such as geometry, is closely "tracked" through the various stages of production to ensure the highest product quality from the first process to the final vehicle rolling off the assembly line.

And artificial intelligence, data analysis and algorithms are widely used to transform decision-making from "experience-driven" to "data-driven".For example, in the paint shop of the Rida factory, an artificial intelligence computer vision system is responsible for taking pictures and analyzing the painted surface of each car, and can take 100,000 photos in 100 seconds.Through machine learning, the system becomes more and more intelligent in identifying the smallest imperfections in the paint finish, as if it has an "eye-catching eye" to ensure that parts and painted bodies are flawless.At present, the BMW Shenyang production base has about 100 artificial intelligence applications.

"Data-driven" is inseparable from a strong network environment and data processing capabilities.For example, the 1,600 multi-function cameras at the Rida factory generate more than 10PB of data per year.To this end, the entire Rida factory is covered with a gigabit 5G network to meet the bandwidth requirements of technologies such as augmented reality (AR) and real-time video transmission.In order to cope with the huge amount of data, BMW Brilliance has also built a new data center for the Rida plant covering an area of ​​about 3,500 square meters, which is equivalent to more than 40 badminton courts and contains more than 1,200 servers.

Produce cars in the most sustainable way

The BMW Group is committed to creating the greenest electric vehicles, and has proposed a goal of reducing the carbon emissions of the average bicycle throughout its life cycle by 40% compared with 2019 by 2030, of which the production level must reduce carbon emissions by 80%.Therefore, the concept of sustainable development is also reflected in every corner of the Rida factory.

Currently, the entire BMW Shenyang production site uses 100% renewable electricity.BMW's Shenyang production base has solar panels covering an area of ​​290,000 square meters, ranking first in Liaoning Province.These solar panels can generate 44,000 megawatt hours of electricity per year—enough to power 9,000 average households for an entire year.Expansion of solar panels will continue over the next few years, with an expansion of 120,000 square meters at the Rida plant.

Since 2019, BMW Brilliance Shenyang plants have used 100% renewable electricity to produce and established the largest solar power generation system in Liaoning Province. On this basis, the Lida plant has continued to improve sustainable standards by taking advantage of new construction, such as establishing The first combined heat and power system (CHP) using natural gas in Liaoning Province, the introduction of more energy-efficient electric servo welding torches in the body shop, the adoption of many advanced processes in the paint shop, and more.The new factory's innovative Intelligent Energy Management System (IOC) monitors energy and resource consumption at the factory, facility, process and equipment levels in real time and optimizes it through AI in-depth analysis.

Moreover, the definition of green in the Rida factory extends to the scope of ecological environment and biodiversity protection.There are more than 11,000 different kinds of trees in the factory area, 7,500 square meters of gardens, 900 square meters of artificial lakes and 33 different types of plants.Sustainable greening and sponge city systems capture rainwater, nourish plants and replenish groundwater.

Flexibility in production is one of the BMW Group's greatest strengths in manufacturing, particularly the ability to deploy resources and adjust production in response to demand within a short period of time.The overall design of the Rida plant is oriented towards the production of electric vehicles, but at the same time, all other models can be produced flexibly and efficiently.

Here, new and derivative models can be integrated faster and delivery times can be further shortened.In addition to BMW's own flexible production technology, there are also widely used automation methods such as intelligent automatic guided vehicles (AGV), as well as a centralized quality analysis through big data to ensure that all production activities are completed with the highest quality. science lab.

Lida Factory is located in Tiexi District, Shenyang City, covering an area of ​​2.9 million square meters. After completion, it will have four production processes of stamping, bodywork, painting and final assembly.The total investment of the project is 15 billion yuan, which is BMW's largest single investment project in China so far.The completion of the project marks that since 2010, BMW Brilliance's investment of about 83 billion yuan in the Shenyang production base has all been successfully implemented, and Shenyang, China has become the largest production base of BMW Group in the world.

In 2021, BMW Brilliance's annual output will exceed 700,000 units for the first time, making it the number oneluxury carcompany.With the gradual increase in the production capacity of the Lida plant, the annual production capacity of BMW Brilliance will increase to 830,000 vehicles, further driving local employment and the development and industrial upgrading of high-end manufacturing clusters.In the past four years, BMW Brilliance has created 6,000 new jobs in Shenyang, and the total number of BMW Group offices in China has exceeded 28,000.

The opening of the Rida plant is also an important step for the BMW Group to accelerate its electrification transformation.In 2022, the BMW Group will provide Chinese customers with five pure electric models including the BMW iX3, i3, i4, iX and i7.In 2023, the BMW Group's pure electric products in China will increase to 13 models.

The name "Rida" comes from the homonym of Lida Village where the new factory is located, which means "home in China, mileage must be reached".The opening of this BMW iFACTORY symbolizes that the BMW Group and BMW Brilliance are embarking on a new journey of resonating with China, promoting electric mobility, and moving towards high-quality and sustainable development.