Evergrande Motor suspended again, and Hengchi 5 continues to be difficult to produce?

Among them, Evergrande Motor needs to meet the requirements of publishing all unannounced financial results required by the listing rules, and resolve any audit reservations; prove that the company complies with the relevant regulations of the listing rules; notify the market of all important information so that shareholders and other investors can evaluate The three requirements of the company's situation can only resume trading. 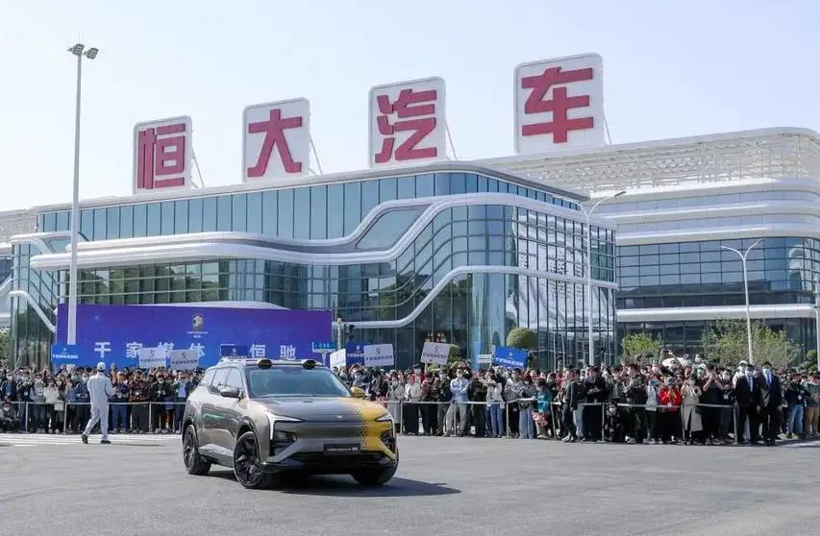 Ever since Evergrande fell into a liquidity crisis, it has started round after round of "selling, selling, selling" to save itself.Escaping the declining real estate industry and heading towards the vibrantnew energytrack, this may be the place where Evergrande Group can really see the light of day.However, due to the great difficulties encountered by the group, the development of Hengchi Auto was also dragged down.

Xu Jiayin once said in October 2021 that "the transformation from the real estate industry to thenew energy automobile industry will be realized within 10 years."Even as a cross-border car manufacturer that is not optimistic, every move of Evergrande Auto will cause heated discussions.Earlier, the market released news that Evergrande Motors postponed the pre-sale of electric vehicles indefinitely, and there was a lot of discussion for a while.

However, Hengchi Automobile later issued a statement, "The market news circulating on the Internet about 'Evergrande Automobile's indefinite postponement ofelectric vehiclepre-sale' is seriously untrue. Affected by the epidemic, Hengchi 5 was originally scheduled for mass production on June 22, 2022. Adjusted to September 20, 2022, and the pre-sale work is progressing normally."

In other words, indefinite is false, but postponement is true.And, this time, it's 3 months.Referring to the news of Evergrande Automobile in the past, Evergrande Automobile has said 3 "big work for 3 months".It's just that this repeated delay has not only made the industry question its strength in building cars, but also added distrust on the consumer side.

Last year, Evergrande Automobile President Liu Yongzhuo revealed that Evergrande Automobile has started a three-month battle to ensure that Hengchi's first car will be rolled off the production line in Tianjin early next year.To this end, the company mobilized core R&D teams and technical elites from Shanghai, Guangzhou, Shenzhen and other places to come to support, and the Tianjin base has been transformed into a domestic first-class high-end smart factory for Industry 4.0.

In March of this year, "The auto group will fight day and night, work hard, work hard for three months, and must realize the mass production of Hengchi 5 on June 22." Xu Jiayin, chairman of the board of directors of Evergrande, did not participate in the progress of the operation and the progress of debt restructuring. The global investor conference call, instead, made important instructions again at the Evergrande Auto Hengchi 5 mass production mobilization conference.

According to the company's information, as of now, Evergrande New Energy Vehicle (Tianjin) Co., Ltd. has more than 51 execution records, and the total amount of execution exceeds 354 million yuan.Interestingly, in one of the execution cases, the execution target was only 17 yuan.Such a small amount is enough to see the plight of Evergrande Auto.

Evergrande's new energy vehicle industry, which has invested more than 50 billion yuan in four years, finally completed the mass production of its first model, the Hengchi 5, in April this year, and obtained a sales license.And it has opened an experience center under the direct sales model, and released information on recruiting agents, but in the channel, Evergrande still has big problems.

In fact, around the pre-sale of Hengchi 5, Evergrande Automobile has launched intensive market activities since May.Including the activities of "Punch in the store and reward the car with a gift" at the exhibition and experience centers in Tianjin and Guangzhou.In addition, Hengchi has held Hengchi 5 static experience activities targeting owners in Hengda buildings in Shenzhen, Chongqing, Chengdu, Haikou and Shaoxing.

According to Hengchi Auto's official website information, Hengchi Auto has established 15 outlets nationwide, 5 of which are Hengchi Exhibition and Experience Centers, and the other 10 are Hengchi Sales Centers.It should be pointed out that the Hengchi Exhibition and Experience Centers are all located in urban business circles, while the sales center is the local sales department of Evergrande Real Estate.

Since a Celis can be placed in a Huawei store, why can't a Hengchi be placed in the Evergrande sales center?Indeed, if Evergrande is willing, it has a stronger channel capability than Huawei.Moreover, the consumption power of home buyers is not worse than that of Huawei products, which is also a rarer and more outstanding resource for Evergrande than other car brands.

But having said that, for the current Evergrande Automobile, the production and sales problems have not been solved, and more importantly, can consumers believe in Hengchi Automobile's products like the recovery of the Evergrande building.This is the same for any emerging car brand. The first product can be recognized by consumers, which determines the future destiny of this car brand.

If Evergrande can withstand the pressure this time, then 2022 will be the year when Evergrande realizes the mass production of new cars.Only by producing products that are welcomed by the market as soon as possible, and forming large-scaleproduction capacity, product quality assurance, and after-sales service system capabilities, may be the key to Evergrande's turnaround.

However, it is more appropriate to describe Evergrande with a turbulent fate. Affected by the epidemic this year, problems such as chip shortages, rising raw materials, supply chain disruptions, and logistics obstructions have become more and more serious. China's auto industry has encountered a "dark moment".Even if it is difficult for strong auto brand manufacturers to obtain spare parts resources, let alone Evergrande Auto is still short of money.

Not to mention the uncertain factor that Hengchi 5 wants to sell at a price range of 150,000-240,000 yuan, even if a good price is set, the future new energy market will begin to enter a bottleneck period, with excess brands and declining subsidies. , The supply chain is broken, and all the unfavorable factors for this market are spewing out, and the prospect of Evergrande Auto is still full of haze.